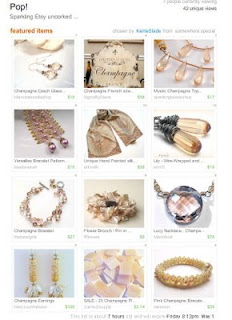 My friend Kerrie Slade has an Etsy Treasury which features some pretty gorgeous stuff - including a few pieces of beadwork (big smiles). Check it out, it expires on Friday!
PS: The more of us that click on her treasury, the more likely it will make it to the front page of Etsy, so please click away!!
bead, beading, beadwork, seed bead, lampwork, jewelry, studio, jewellery, art, calendar, artist, weaving, woven, peyote, brick, herringbone, netting, hybrid, crystal, necklace, bracelet, Susan Mandel, gallery, beadweaver
Posted by SuzyQ at 08:18 1 comment:


This interview originally appeared on CBS in March, 2008.
Posted by SuzyQ at 08:30 No comments:

A friend just loaned me a first CD from Northern California Duet Ma Muse entitled "All The Way" (released February '09). Their music is so beautiful I thought I'd share some songs with you. My favorite is "Glorious"... To listen: Glorious

Oh what a day,
Glorious...
We've got good friends
to the left of us
And good friends to our right
We've got the old friend sky above us
And the earth beneath our feet
Never fear the birds are singin'...
Oh what a day...

To hear more sample songs, click on the title above and enjoy this glorious day!
Posted by SuzyQ at 08:06 No comments: 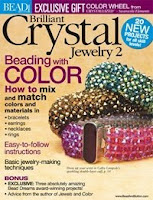 I recently received my copy of Brilliant Crystal Jewelry 2 from Bead and Button magazine and I was so excited to see it - it is absolutely beautiful!

This special edition has a variety of gorgeous, inspirational projects - bracelets, necklaces, earrings, rings - each with very well written and illustrated step by step instructions. There are also three wonderful articles on crystals and designing with color. And it comes with a great little gift from Swarovski - a crystal color wheel :) (it's brilliant too!)

I can't say enough about how well done this edition is. (I also can't decide which project is my favorite because they are all so pretty). For readers who have been waiting for the step by step instructions for my crystal Noose necklace, it's in this edition too. 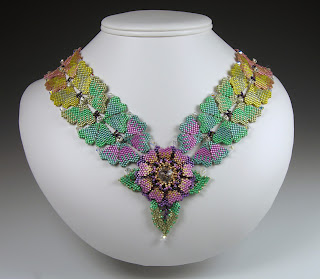 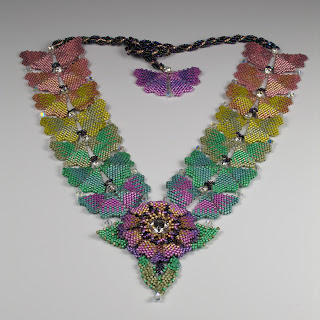 My friend and fellow beadweaver Jonell created this masterpiece from following the Butterflies Galore pattern. Isn't it gorgeous?!! After creating the bracelet which appears in the April edition of Bead and Button (Butterflies Galore), she wanted to make a necklace using a rainbow of colors. She accented the center flower with leaves and chose clear crystals that shine like little diamonds. It is so beautiful in person!!! Thank you for sharing, Jonell - you are an inspiration!!!
If you're interested in the Butterflies Galore pattern, be sure to pick up the latest edition of Bead and Button magazine. Kits for the bracelet ("Vitrail Butterfly") are also available on my sister site: Beadweaver Studio. 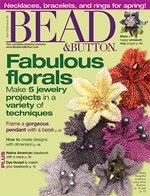 How Miyuki Seed Beads Are Made

I recently came across this article from Barry Kahn of Caravan Beads on the Harlequin Beads website. I thought I'd pass it along. Enjoy!

In April 2000 I (Barry Kahn of Caravan Beads) visited the Miyuki glass bead factory in Japan. My tour was fascinating and the information below is what I gleaned from touring the factory. I was not invited to photograph most of the process, sorry. -bk

How Miyuki Glass Seed Beads Are Made

Step One: Raw materials and recycled glass of the same color are mixed and melted in the furnaces. The Miyuki factory has both automatic and manual furnaces operating 24 hours per day. They are on the 2nd floor.

Step Three: After dropping to the first floor, the vertical tube of falling glass passes under a thick chunk of wood and turns at a right angle to become horizontal. Imagine a vertical length of rope passing under a pulley and then being pulled sideways. The scene in the glass factory is much more dramatic, however. For starters, the glass "rope" is still extremely hot so that it is slowly burning its way through the smoking piece of wood. In addition the tube of glass is actually being pulled over a series of metal troughs by a machine which not only pulls the glass but also cuts it into one meter lengths. The speed of the pulling determines the diameter of the glass tubes. A faster pull makes thinner tubes; a slower speed makes them thicker.

Step Four: The cooled tubes are sorted to make sure that they are the correct diameter for the size beads being produced. Any tubes which are not the correct size will be recycled and remelted to make new glass.

Step Five: The tubes are cut into beads. As the cutting room is not open to any outsiders, I can't offer further information. I did learn that one Delica cutting machine can only cut 4-5 kgs per day, which is one reason for their high cost. (And contrary to some rumors, Miyuki cannot run the Delica cutting machines faster to keep up with increased demand, with an accompanying decline in quality. Instead high demand just leads to longer waits for production). Delicas are not cut by lasers, by the way, another occasional rumor.

Step Six: Cut beads are mixed with carbon black and reheated to make them round. Delicas are only slightly heated; round beads are heated more.

Step Seven: The beads are washed. Miyuki has their own on-site water treatment equipment.

Step Eight: The beads are heated again to give them a surface polish. Basic opaque and transparent beads are now finished and ready to pack.

Step Nine: Fancier beads (AB colors, silver and color-lined, metallic, etc.) are based on the basic opaque and transparent colors. There are several different locations in the factory where dyes and other coatings are applied. Some beads require multiple treatments which directly influence their final cost. After dyeing or color-lining beads, Miyuki reheats them again to "set" the colors, a step skipped by some bead companies to reduce costs.

Copyright note: This information is copyright 1996-1999 by Caravan Beads, Inc. It may be freely printed, copied, and distributed electronically IN ITS ENTIRETY. Please--no quotes out of context. Any errors, typos, etc. are the fault of Caravan Beads, Inc. and should be brought to our attention--thanks! Feel free to post it on the appropriate bead sites on AOL, Prodigy, Compuserve, etc.
Posted by SuzyQ at 12:11 1 comment: